Should we be trying to figure out if AI is better than Human Intelligence? 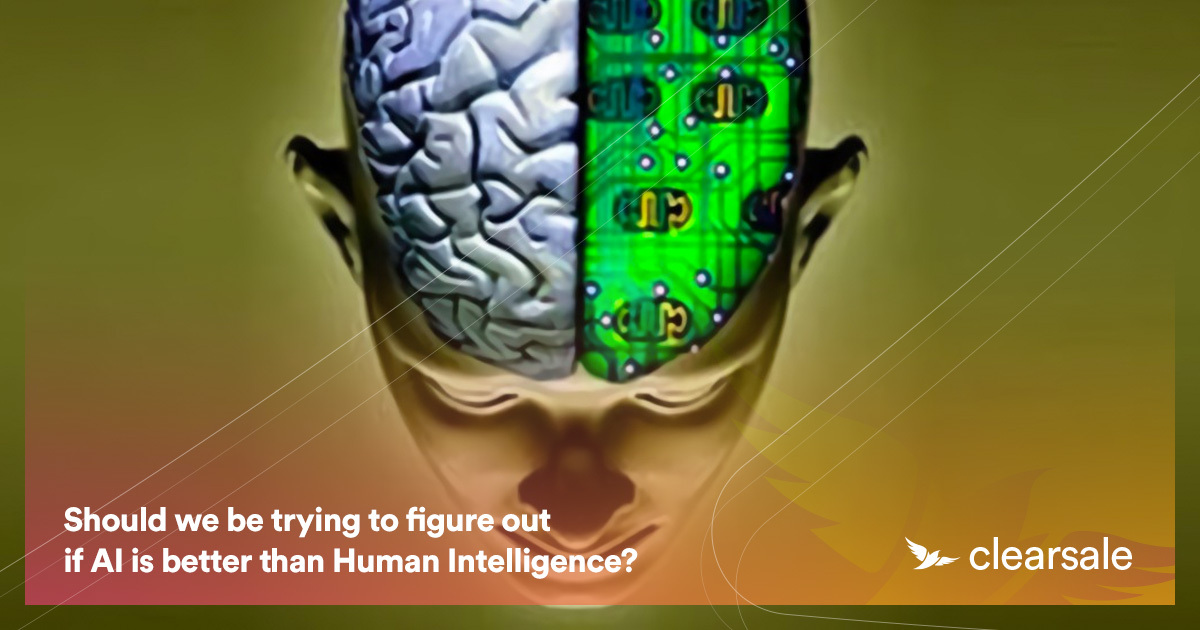 The danger of AI is not its ability to think and learn, but its autonomy, the type of decisions we leave entirely to its care.

It is well known that fraud prevention algorithms can make decisions faster and cheaper.  They have great value, especially when used as one component of a combination of technologies such as device fingerprint, in-screen behavior and others. Everyone agrees that this type of technology and intelligence are beneficial to all of us in the fight against fraud.  However, despite the clear advantages of implementing algorithms (efficiency, scalability, etc.), there remains the question of final decisions in situations where algorithms alone are not enough, situations in which human intervention is necessary [and desirable]. Below we discuss some of these points:

Algorithms are based on historical data, but what happens when there is a completely unprecedented event? Or cases that AI has not yet been taught to resolve?

Perhaps you have heard of the Winograd Schemas, named for Terry Winograd, the well-known Stanford University AI researcher. A Winograd Schema is a test of machine intelligence proposed by Hector Levesque, a computer scientist at the University of Toronto. In the early seventies, Winograd asked what would be required to build a machine to answer questions such as: The town councilors refused to give the angry demonstrators a permit because they feared violence. Who feared violence? The town councilors or the angry demonstrators? Levesque developed a set of similar problems, designed to be easy for a human but difficult for a machine. These examples are difficult for machines, as (1) they require common-sense reasoning, which can still deceive machines, as (2) the solution is based on answers not available in databases - unusual behavior can deceive all types of artificial resources if the database lacks data on sufficient similar situations.

How to keep databases clean and updated, without knowing the reality of a set of automatically denied transactions?

Some companies deceive themselves by believing that any large database constitutes  Big Data. However, the amount of stored transaction data is merely one element of the equation. Increasing the amount of stored transaction data will doubtless improve your forecasting ability; however, its full power is only achieved if the quantity of stored transaction data increases. Variability of the data available is another key question to improve forecasting power. At this point, having human intelligence that captures the nuances and details of new types of fraud to feed the database with new data, and patterns that are different from those already in the system, helps it make better decisions in future. This iterative process must be constant for databases to keep pace with changing fraud behaviors. If the transactions that give rise to this data had been merely denied, rather than being analyzed prior to the decision, the system does not learn and over time will become less reliable.

Do not be shortsighted: Algorithms are optimized for a particular goal in a particular point in time, and do not always understand the trade-offs. For example, if an algorithm is programed to reduce fraud, that becomes its main goal and it does not consider the consequences that a high turn-down rate can have on a merchant's reputation. There are numerous merchants who believe that fraud is not a problem for them because their chargeback rates are low. Chargeback is a good measure of the quality of a fraud prevention system; however, it should not be the only one. Relying on chargeback alone can be a dangerous trap, as it does not reveal revenue avoided - orders canceled due to anti-fraud measures are not recorded in financial statements as losses, but are often lumped together with sales stopped due to mistakes in billing data, cart abandonment, etc.

Try to learn what your algorithms cannot answer: this is as important as knowing what they can answer. It is easy to give into the belief that forecasts made in one scenario will apply equally to others. Yet bear in mind that correlation is not the same as causality. Forecasting algorithms do not eliminate the care that is necessary when establishing cause and effect relationships. For example, anti-fraud rules often deny a whole set of transactions where the billing and delivery address are different. However, not every purchase with different billing and delivery addresses is a fraudulent transactions. There are legitimate situations where this is justified, such as a young person who recently moved out of the family home and is buying a TV for his or her new home, but kept the parent's address as their billing address.

The question should not be if AI is better or worse than human intelligence. The challenge is not to give into the temptation of trusting AI alone to resolve all problems, but rather to understand its risks and limitations and use it in an optimum combination with human intelligence to unlock the full potential of both. Humans and machines both have their strengths. The best option is a combination of both, using the scalability of algorithms and the ability to understand complex subtleties of humans to ensure the best possible outcome. For example, Match.com can introduce you to a plethora of potential partners, but your friends are likely the best judges of character, or at least more qualified than a computer to figure out if somebody does not "seem right" - both are valuable.

This has been confirmed by the market. Twitter replaced content filtering algorithms with humans, and the leading music streaming apps also use human beings to refine their playlists. Fraud prevention companies that used 100% system based decisions now defend the use of a team of analysts who review transactions the system may have turned down.

In the next posts we will provide some real examples faced during the fraud prevention process, describing situations where the AI alone would lead us to mistakes.