New research shows 33% of US consumers drop retailers after a false decline. Here's how to prevent those losses 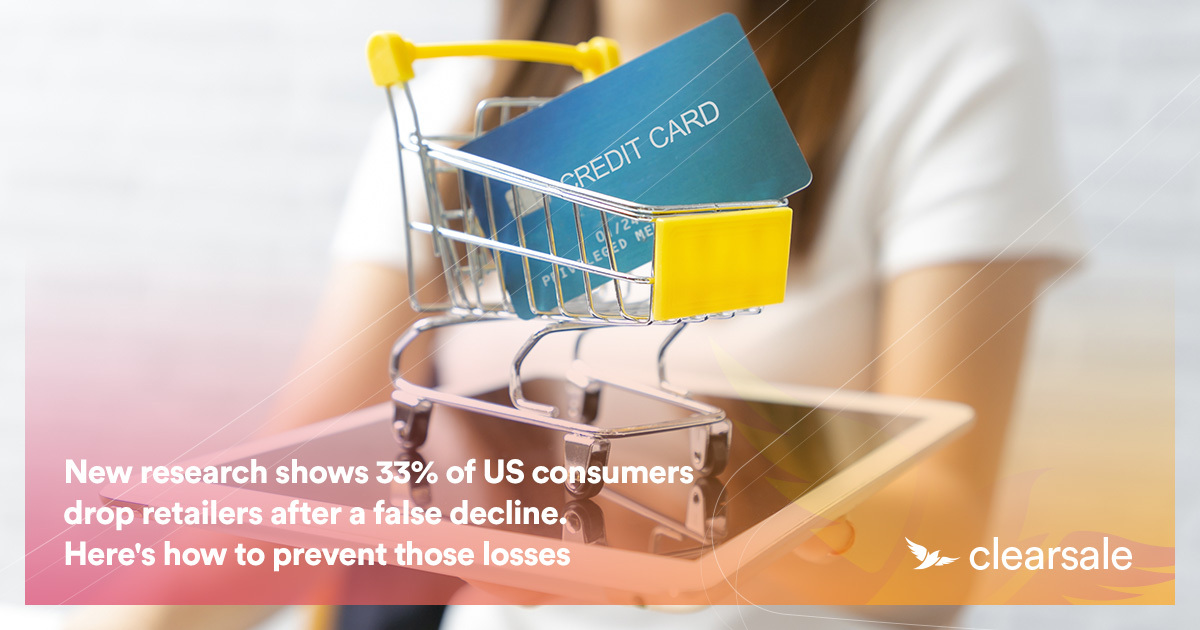 If you told 100 of your customers that you wouldn’t do business with them because you thought they were fraudsters, how many would leave and never come back? Most merchants would never think of doing such a thing face-to-face, but in the digital world, good orders from good customers get rejected all the time. And, according to a recent survey by Sapio Research, 33% of U.S. consumers say they would never shop again with online merchants who treat them this way.

False declines—good orders that get rejected on suspicion of fraud—have always been a problem for e-commerce merchants. Merchants lose revenue and they often don’t know how much. That’s because some merchants and fraud protection providers classify all rejected orders as attempted fraud.

What are false declines really costing merchants? Sapio’s March 2020 survey, which reached over a thousand U.S. consumers who shop online at least every few months, can help us understand. It’s important to note that this survey took place before the full impact of stay-at-home orders and business closures pushed more people to shop online. However, the data here gives us a benchmark for the damage false declines cause.

Analysts and fraud experts estimate, based on industry data, that somewhere between 30% and 65% of all rejected online orders are legitimate, not fraud. That will vary from merchant to merchant, based on how they screen orders for fraud and whether they manually review suspect orders or simply throw them out.

But what does that estimate mean in terms of customer loss? That means for every 100 orders the average store declines, 30 to 65 of those orders were legitimate. And, with 33% of shoppers in the Sapio survey saying they won’t come back after that kind of experience, that means anywhere from 9 to 21 customers are lost for good after even one false decline. 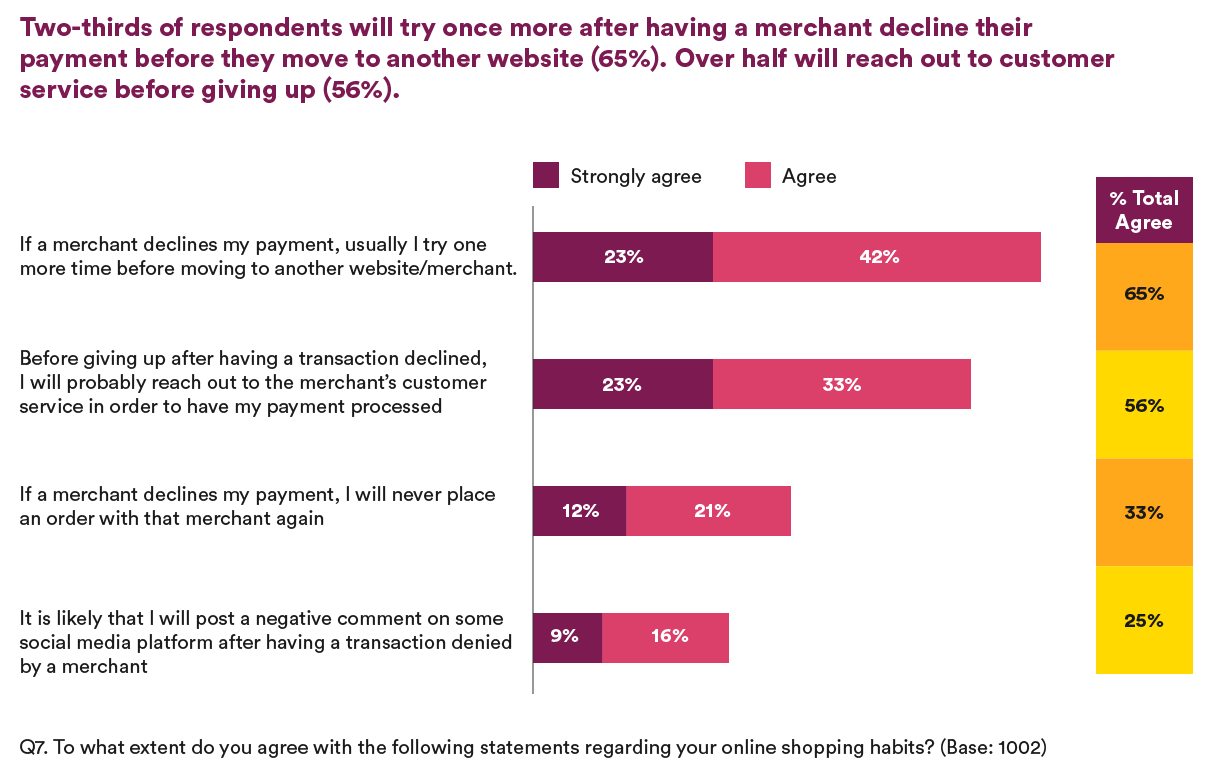 The frequency of online transactions means there are many opportunities to decline good customers by mistake. Sapio found that “two-thirds of online shoppers shop at least once every two weeks,” with many shopping online more often recently. Forty-five percent said they’d been shopping online more frequently over the past six months—even before stay-at-home orders pushed many consumers to shop online for nearly everything.

Whatever your average cost is to acquire a customer is, it’s lost when they leave after a false decline. And each of those shoppers who doesn’t come back reduces the average lifetime value of your customers. Among the Sapio survey respondents, the average monthly online spend was $174, not including online purchases of food, digital goods like music and movie downloads, and hotel and airline bookings.

Rejected customers can make it harder for merchants to attract new customers, too. A quarter told Sapio they’d probably post something negative on social media about the experience of being rejected by a merchant. That kind of brand damage can raise your cost to acquire customers. If the problem is bad enough, you may need to spend more on specialized marketing to repair reputational damage.

More than a quarter—28%--of the consumers surveyed said they’d experienced a decline while shopping online. The survey asked about the devices they were using when those declines happened.

Consumers were most likely to experience a decline while shopping on a public computer, with 50% of public computer users reporting declines. Forty-three percent of gaming platform users said they’d been declined. Users of tablets, personal laptops and work laptops reported fewer declines, at 22%, 20%, and 19%, respectively.

Fully one third--33%--of mobile users said they’d experience a decline while shopping on their phone. This is a big problem for merchants, because while few consumers use public computers and gaming platforms as their main online shopping devices, 52% of consumers in the survey say their phone is their first choice for shopping—the highest percentage for any device mentioned in the survey. Among the youngest respondents, age 18 to 24, 70% were mobile-first.

This combination of high mobile usage and relatively high decline rates presents a large potential loss of revenue and customers for e-commerce merchants. What can merchants do to reduce false declines and keep their good customers?

Here is where the survey results show the fraud-prevention tightrope that merchants have to walk.

Gathering more information seems like the logical approach to preventing fraud without turning away good customers. But longer checkout processes lead to fewer sales. Fifty percent of the survey respondents said they had abandoned purchases because the checkout process was too long or complicated.

Most customers balk at requests to provide extra proof

Simply asking some customers for more proof that they’re legitimate isn’t workable, either. Eighty percent of consumers said they would likely not proceed with an order if the merchant asked for more personal information or copies of documents to confirm their order. Sixty-four percent said they probably wouldn’t proceed if they were asked to call customer service to confirm their order.

What can merchants do?

So, merchants have to provide a fast, simple checkout process that doesn’t feel intrusive or require customers to share additional information if there’s a fraud concern. Part of the solution is to better leverage technology.

The majority of consumers surveyed were OK with using technology to flag suspicious online purchasing behavior and to monitor websites, profiles and transactions for good customers and fraudsters. Fraud prevention programs that use rules based on these technologies and machine learning can tailor fraud flags to each store’s risk profile. All of that plus expert manual review of flagged orders can help merchants avoid automated declines and prevent chargebacks.

However, even the most comprehensive fraud prevention program needs to be tailored to each channel. Mobile orders, laptop orders and orders on other devices should all be screened based on behavior and risk on each channel, rather than applying one set of rules to all channels. That’s especially important to prevent fraud and false declines in the mobile channel.

As more retailers focus on e-commerce and more consumers shop online, merchants who can prevent fraud and avoid turning away good customers will generate more revenue, keep more customers and earn more value from them over the course of their relationship.