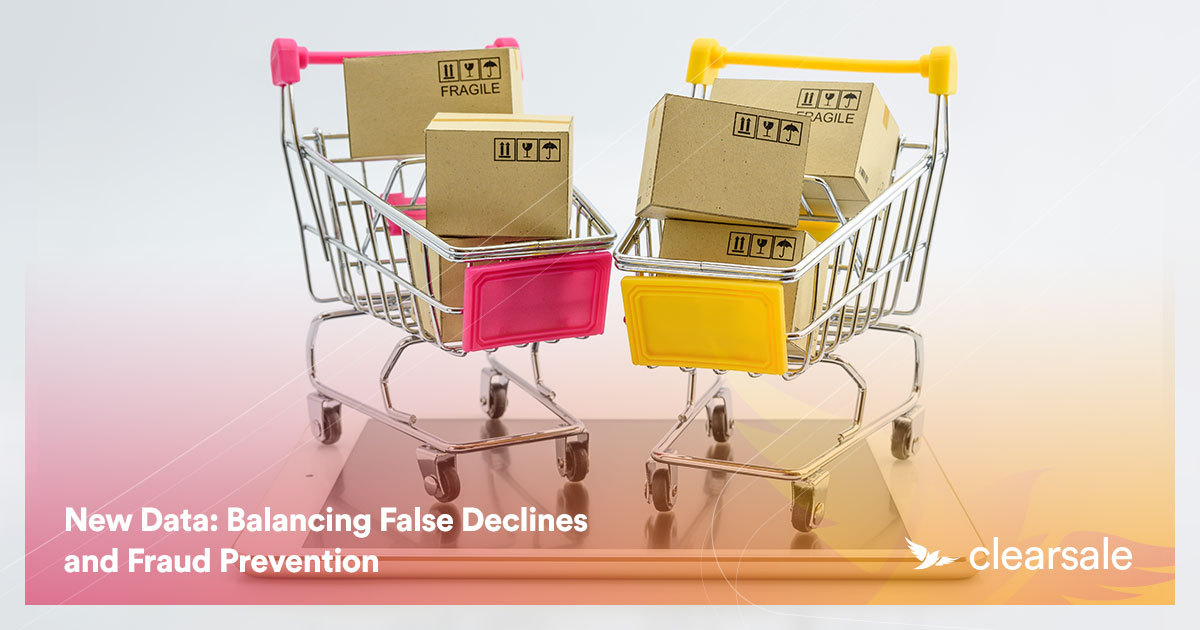 In the new report commissioned by ClearSale and researched by the Aite Group in 2019, “The e-Commerce Conundrum: Balancing False Declines and Fraud Prevention,” the data indicates that merchant losses to e-commerce fraud are projected to grow to $6.4 billion by 2021.

This creates a dilemma: To protect themselves from this growing risk of fraud, merchants often overreact by implementing a more conservative approach when approving transactions. This in turns leads to issues with false declines, where legitimate transactions are incorrectly identified as fraudulent and declined.

In fact, the Aite report predicts losses due to false declines will grow to $443 billion by 2021 – dwarfing the losses from fraud itself.

Here’s what Aite Group learned about how merchants are working to prevent fraud, reduce false declines, and improve the overall customer experience.

Chargebacks are one of the biggest factors behind merchant losses to e-commerce fraud. More than half of the merchants Aite Group surveyed lost between 11 and 50 basis points in revenue in 2018 due to fraudulent chargebacks, with 22% suffering more than 50 basis points in losses.

Merchants today want to be able to safely sell their products and services online, but they don’t want to have to become fraud prevention experts to do so. As an alternative, many merchants are turning over order reviews and the approve/decline decision-making process to a trusted third-party fraud solution.

But whereas 25% of surveyed merchants completely outsource their CNP fraud prevention, merchants are also finding other creative ways to fit protection into their budgets, including:

The data suggests there’s no one-size-fits-all approach to fraud management, and that savvy merchants are willing to tailor a solution that fits their own unique business needs.

The Problem of False Declines

The more comprehensive the fraud solution, the more successful merchants will be in declining fraudulent transactions. Unfortunately, often this means legitimate transactions end up declined as well. As many as 62% of surveyed merchants reported their false decline rates have increased over the past two years.

Not only do these false declines cause merchants to lose revenue, they also upset the good customers who are trying to make a legitimate purchase. These angry customers often abandon the merchant for future purchases and may even leave negative reviews on social media that can further hurt the merchant’s reputation and ability to grow.

In fact, because false declines are often not easy to measure, some merchants unknowingly believe they don’t have a problem with false declines. This means they may be completely unaware they’re potentially leaving good money on the table.

But there’s good news, too: According to the Aite report, 79% of merchants do in fact measure false declines. Interestingly, though, their average false decline rates vary widely:

The key, of course, is to understand what is causing these false declines to happen in the first place. A few helpful tactics can help merchants learn more about their false declines, so they can implement smart strategies to prevent them.

Often when a good customer is falsely declined, the customer will make a second attempt to purchase the product. Measuring the number of second purchase attempts that don’t result in a chargeback can provide a good indicator of whether a false decline was behind the original transaction.

Of course, second attempts don’t always happen; many customers abandon their carts completely after a false decline and instead take their business to another merchant.

2. Use a Control Group

In a control group strategy, the merchant siphons some percentage of suspicious-looking transactions into a control group. By analyzing which orders in the control group result in chargebacks, the merchant gains valuable insight into what legitimate customer behavior looks like versus fraudulent behavior. This data can then be used to further fine-tune the fraud strategy moving forward.

Sometimes there’s no substitute for a good old-fashioned conversation. When something about an incoming order raises a red flag for fraud, it may be helpful to reach out to the customer directly, whether via phone, email, or even online chat if the customer is still on the website. While it may be imprudent to do this for every suspicious order, if the customer is important enough or the size of the order is large enough, this direct validation can help safeguard both critical revenue and valuable relationships.

However, just as no two e-commerce businesses are the same, neither are any two risk tolerances. Each merchant must determine the right balance between preventing fraud and approving every good order. Understanding this comfort level will help the merchant identify the fraud mitigation solution that’s best for their business.