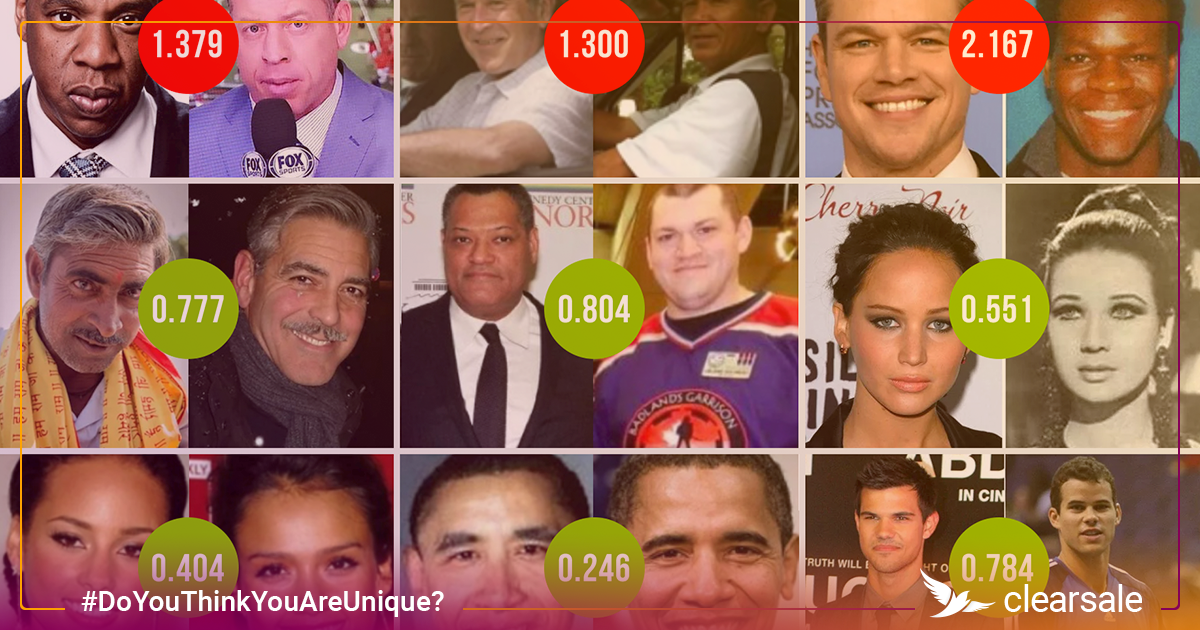 We love data here at ClearSale, and we love teaching machines how to get smarter. While we channel our passion for data analytics and AI into fraud prevention, we also see uses for those tools everywhere—even in the faces of some of the world's most recognizable celebrities.

So when one of our statisticians, Paulo Azevedo, saw this popular post about celebs with unexpected lookalikes, he wondered if it was possible to use AI to not only spot the resemblances but also to quantify the degree of facial similarity.

First, the post that spawned Paulo's side project. Writer Ashley Reign at Ranker put together an article asking readers to vote on the degree of resemblance between 30 Western film and music superstars including Jennifer Lawrence, Pitbull, Snoop Dogg, and George Clooney, all paired with celebrities from other eras, entertainers from other cultures, or everyday people. Readers were invited to vote thumbs-up or thumbs-down on whether each pair—such as Lawrence and Egyptian actress Zubaida Tharwat—had an uncanny resemblance to each other. 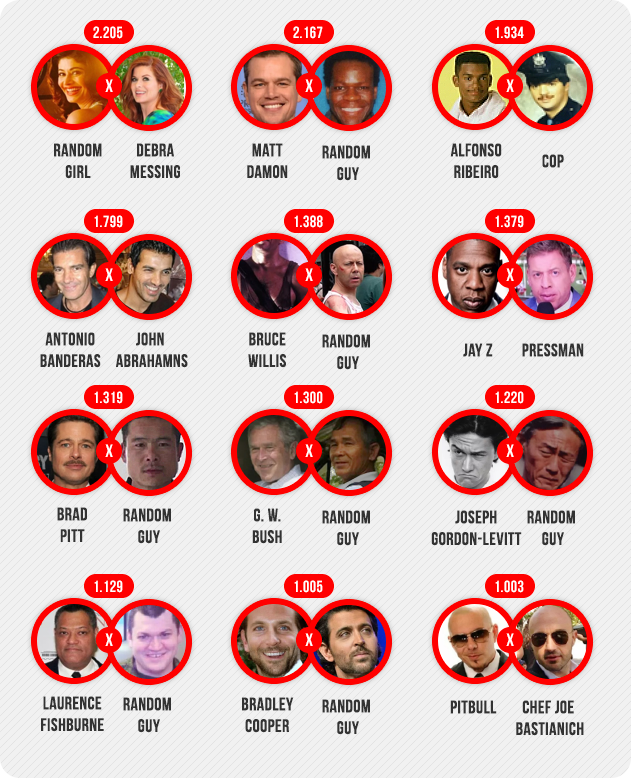 How much do they really resemble one another?

Paulo wanted more specific answers, and with his statistics training from top-rated Brazilian school Unicamp and a machine-learning certification from Stanford, he knew how to get them. Paulo gathered a team and they went to work scoring pairs of photos based on the degree of facial similarity.

Using OpenFace, an open-source deep-neural-network facial recognition tool, Paulo and his team applied its same steps and principles to their project:

OpenFace scores matches so that a lower score indicates a higher likelihood that the two compared images are of the same person. In OpenFace's demo, a score of 0.99 was the distance threshold that indicated the images belonged to different people.

What happened when Paulo and his group fed in the images from Ranker's celebrity article? The uncanny resemblance between actors Lawrence and Tharwat score at 0.55, as if the AI found a high likelihood that they are the same person. (For reference, the program scored two different photos of Paulo at 0.54.) Other star pairings rated even more likely to be the same person, including the pairing of Alicia Keys and Jessica Alba, with a score of 0.404 and the pairing of Rita Ora and Rihanna, which scored 0.472.

The strongest similarity score, however, came from analysis of the pairing of former US president Barack Obama and an unnamed Indonesian photographer. The AI scored the likelihood that they were the same person at 0.246 in Paulo's experiment.

What do the results mean for AI face identification?

One possible conclusion to draw from this exercise is that AI has a ways to go before it can accurately distinguish between individuals as well as humans can, especially if the image subjects are posed and styled in similar ways. The developers of OpenFace have said that “further experimentation should be done on the distance threshold” between images of different people to refine the results. And that's what AI and machine learning are all about, of course—collecting and analyzing enough data over time to learn which results are valid and which are not. Paulo and his team are excited to be contributing to that knowledge by adding data and sharing their results.

Paulo is a Statistician from a Top-Ranked University (Unicamp) and holds a Machine Learning Certification from Stanford University.