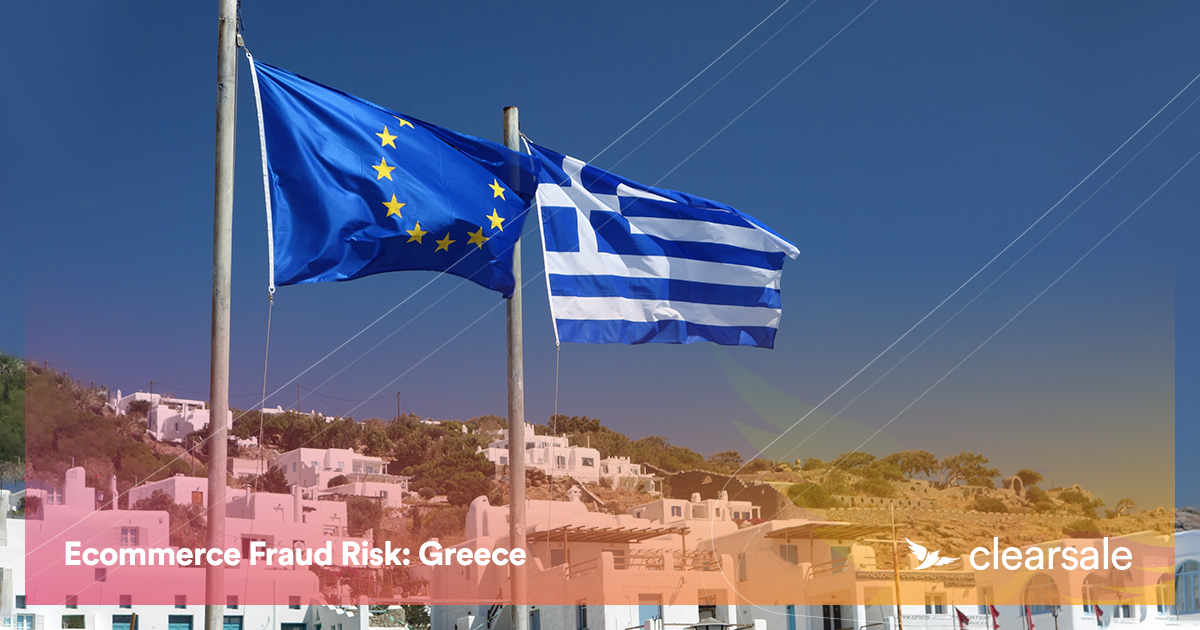 As the Greek economy reinvents itself after its devastating economic crisis, its consumers are turning increasingly to ecommerce.

As a result, ecommerce businesses looking to expand into (or start up in) Greece can potentially get in on the ground floor of a major economic expansion. However, this market is not without risk.

Greece is the 45th largest market for ecommerce with a revenue of US$2 billion in 2019. Ecommerce is projected to reach US$2.8 billion this year, with an annual growth rate of 8.9%—resulting in a projected market volume of US$4.3 billion by 2025.

This segment is one of the positive indicators for the country’s economy, which “emerged nearly two years ago from eight years of international bailout programs.” And while “Greece’s economy will contract by an estimated 8.2% this year due to the effects of the coronavirus pandemic,” it is expected to pick up next year, according to a budget submitted by the Greek government.

Greece’s recent economic crisis impacted consumer shopping behavior, and the pandemic is only accelerating ecommerce adoption. Greek business marketing consultancy The Port notes that by allowing consumers to shop and compare many products and prices at one time, ecommerce has gained an important advantage over retail stores in Greece.

“Due to income reduction, consumers have become more price sensitive which directs them towards online shopping. As bargain buyers, most Greek consumers are looking to compare a wide range of products for the best deals, which only works to the ecommerce industry’s benefit.”

While online customers in Greece amounted to just 32% of all consumers in 2019 (against 53% in the European Union) during the spring, weekly consumer expenditure at online stores grew by up to 170% year-on-year, per the Athens University of Economics and Business and the Greek Electronic Commerce Association (GRECA).

As the country leaves its economic low point behind, these frugal impulses are likely to remain, and online shopping is well positioned to reap the benefits.

According to an online survey conducted by the Research Institute of Retail Consumer Goods and ELTRUN, these changes in consumer habits are likely to outlast the pandemic; 50% of consumers say they will continue making online purchases even after the end of the crisis.

The Ecommerce Landscape in Greece 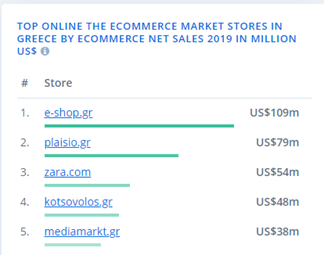 With a population of 11,142,161, Greece is a sizable consumer market with a well-established ecommerce sector, newly energized due to the pandemic.

Ecommercedb.com reports that the biggest player in the Greek ecommerce market is e-shop.gr. The store had a revenue of US$109 million in 2019, followed by plaisio.gr with US$79 million revenue.

Fashion is the largest segment in in Greece and accounts for 34% of ecommerce revenue and a projected market volume of US$949m in 2020. This segment is followed by Electronics & Media with 25%, Food & Personal Care with 17%, Toys, Hobby & DIY with 16% and Furniture & Appliances with the remaining 9%.

Challenges and Opportunities in the Greek Ecommerce Market

Greece, like other countries with an emerging ecommerce market, offers logistical and infrastructure opportunities and limitations to merchants looking to enter this market. Here are some examples:

On the other hand, there were 15.83 million mobile connections in Greece in January 2020, the equivalent to 152% of the total population. The demographics of mobile use explain why.

According to data from Statista, 93% of Greek internet users in the age group of 25-34 access the internet every day. The percentage goes to 89% for the age groups 16-24 and 35-44, 77% for people 45-54 and 68% for people older than 55. Younger generations are leapfrogging the home internet connection and going straight to mobile.

Ecommerce localization firm Glopal reports that “for B2C online purchases particularly, mobile ecommerce now makes up a significant proportion of Greece ecommerce market and within the next 12 months is likely to surpass desktop usage.” When setting up an online store, mobile optimization and a great mobile buying experience must be core to your broader ecommerce strategy in Greece.

Like many developing markets, many Greeks do not have reliable access to banks, leaving a significant segment of Greece’s population without debit or credit cards. Payment platform paymentwall.com notes that most of Greek online purchases are completed with prepaid cash cards, which provide a convenient alternative to credit or debit cards.

Rapid changes in the payments industry, the rise of ecommerce and the constant threat of fraud have led the European Union (EU) to update its Payment Services Directive (PDS) in regard to the security of electronic payment transactions, including via online stores.

KeepTalkingGreece.com reports that effective September 2019, users must confirm their identity through strong customer authentication during a transaction defined as a combination of knowledge (something only the user knows, such as a password or PIN), possession (something only the user possesses, such as a mobile device or app) and inherence (something the user is, such as a fingerprint, facial scan or other biometric feature). The authentication factors must be mutually independent so that the breach of one does not compromise the reliability of the others.

The Hellenic Bank Association (HBA) says that the new security requirements apply to the following types of transactions:

Among EU countries, Greece is on the lower end in terms of fraud risk in ecommerce with 53% of survey respondents who shop online frequently having a fraud or scam experience of any type over two years (Greece is represented by “EL” on this chart’s x-axis): 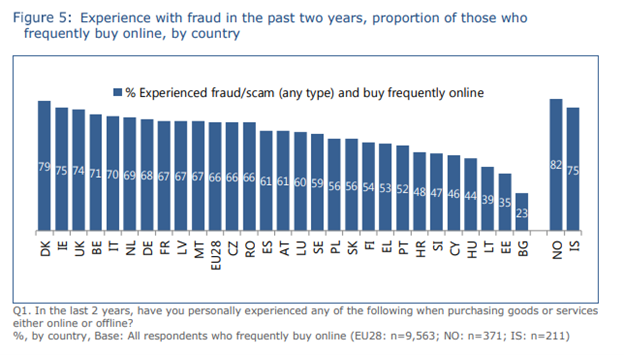 As ecommerce transactions increase, it is likely the incidences of fraud will as well. Statistica reports that “between 2015 and 2019, the value of card fraud increased by 3.8 million euros.” Card fraud includes counterfeit cards, card stolen or lost, card not present (CNP), card lost or stolen in the post, ID fraud and others.

A European Central Bank study of fraud in card payments shows the importance of continuous fraud monitoring and vigilance. In 2018, 79% of the value of card fraud in the EU resulted from card-not-present (CNP) payments (i.e. payments via the internet, mail, or phone). Obviously, this raises concerns for ecommerce merchants who rely on CNP payments.

How Retailers Can Protect Themselves

The burgeoning Greek ecommerce market offers a tempting opportunity for ecommerce expansion, as long as merchants protect themselves while they grow their business.

One inexpensive and simple option is applying static rules to prevent fraud, but this method isn’t always effective. When simple fraud filters are layered, they often have the unintended consequence of preventing legitimate customers from completing transactions. That’s not the first impression you want to make when introducing your brand in a new market.

A combination of fraud detection solutions — including an expert team of analysts and advanced artificial intelligence — will allow you to safely grow revenue and protect against fraud, chargebacks, and false declines. ClearSale uses this exact solution with its more than 2,500 customers worldwide and can help you take your business to the next level. Contact us today!