May 5, 2021 Country Profiles, ClearSale in the Media, Industry Profiles

Specifically, they reference data from ClearSale’s 2021 Global Ecommerce Consumer Behavior Analysis which surveyed respondents about their ecommerce opinions and behaviors related to fraud, cross-border shopping and purchasing habits in general.

It’s clear from the data in both guides that cross-border ecommerce is an area of opportunity for online merchants.

The key is to be aware of the trends that will continue to shape this burgeoning market.

The ClearSale analysis offered some promising data about the emergence and opportunity in cross-border ecommerce based on how consumers behave now. 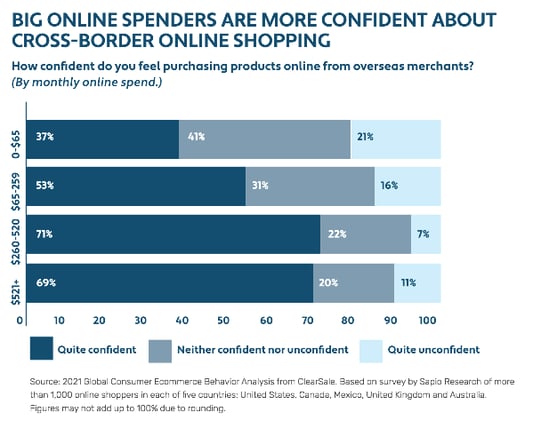 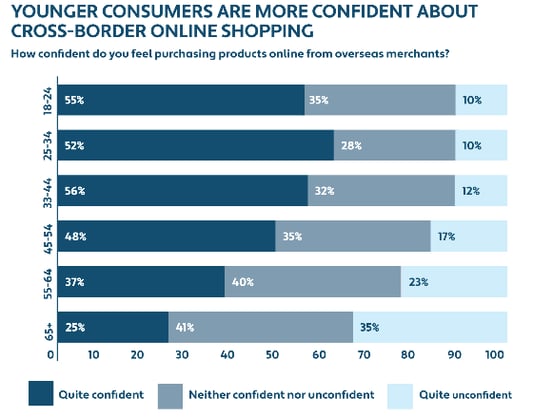 The takeaway: Cross-border ecommerce merchants need to win
over Gen Z and Millennial shoppers to establish a loyal base
of returning customers.

The Digital Commerce 360 guide also highlighted the impact that price has on cross-border ecommerce.

According to a 2019 International Post Corporation (IPC) survey, consumers said that getting a lower price was one of the main reasons they purchased from foreign online retailers. It also revealed that

Chinese consumers accounted for 39% of those consumers’ most recent international purchases. The U.S. came in second at 14%, followed by the U.K. at 10%, and Germany at 9%.

This phenomenon might be attributed to two other key differentiators – safety and quality. The IPC survey found that middle-class consumers valued both of those factors above price.

The takeaway: Ecommerce merchants in the U.S. have a real opportunity
for cross-border ecommerce when price isn’t the only focus.

There is no doubt that international consumers are looking for safety and quality from North American brands.

Digital Commerce 360 uncovered that 12.6% of traffic to the Top 1000 online retailer sites in 2019 came from outside of the U.S. – excluding Amazon, Microsoft, and Apple, which experience a high percentage of overseas traffic.

When analysts broke the data into product types, there were a few clear winners: 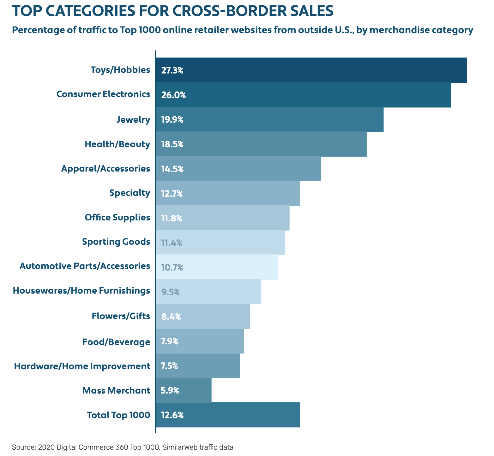 Despite this trend, cross-border ecommerce has not been adopted by the majority of U.S. online retailers. Just over half (51.5%) of North America’s top retailers ship to the U.K., less than 49% will take orders from shoppers in Germany and Australia, 43% will ship to the Middle East, and only 41% of those retailers will sell to consumers in China. Keep in mind, China is the world leader in online shopping. 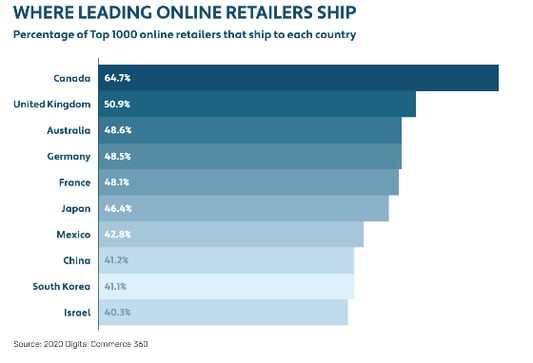 The ClearSale study shows that U.S. consumers are equally reserved when it comes to cross-border ecommerce – only 52% of them shop cross-border compared to 72% of Mexican consumers, 60% of Australians, and 53% of Canadians.

This points to two factors:

Cross-border ecommerce does present more of an opportunity for fraud to take place, but merchants with a comprehensive fraud prevention and protection strategy can guard their businesses from fraud and seize the opportunity that this expanding market presents.

The key is making sure you have a solution in place.

“Although cross-border e-commerce has simplified international consumers’ ability to purchase needed products and services, not every online merchant is created equal. With the increasing frequency of card-not-present fraud and other online purchasing risks, customers are more concerned than ever with making purchases with untrusted merchants. To make an online purchase, customers must have confidence in both that online transaction and the merchant from whom they’re purchasing.”

For more information about cross-border ecommerce and for help evaluating your fraud prevention strategy, contact one of our representatives. At ClearSale, we are here to assist you stop fraud, sell more, and create better consumer experiences.